Psi Corps "All Roads Lead to Amber. Parts I & II" 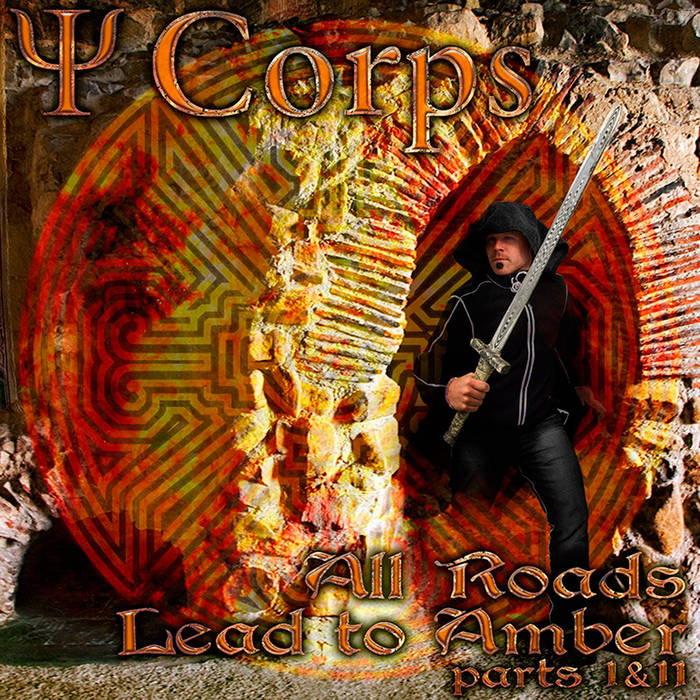 "The listener is presented with nine well crafted, moody and atmospheric pieces that are really effective, being original in approach and sound. The album has been constructed in such a way that it doesn’t sound like it conforms to any real convention, sonically being unique, a free spirit, with its curious and strange soundscapes, but we aren’t talking avant garde here. The album works on two levels sonically for me. Quietly through headphones where you can hear all the little nuances that Psi Corps have created, dragging you into their music, with its rhythmic, trance like passages, featuring interjections of spacey, psychedelic tones, almost cinematic in approach; every note being positioned in the construction perfectly, which at first sounds odd, but is very effective. Secondly when the album is played loud, the whole dynamics of the piece just seems to change, it becomes intense, powerful, dark and menacing, the room fills with powerful sonic passages, air sculptures that swirl and twist, leaving you under no illusions that Psi Corps mean business. Alisa’s has put her experience to good use, making music that would appeal to fans of Hawkwind, Space Mirrors, Ozric Tentacles, Ayreon and Tangerine Dream. Throughout, a balance of keyboard and guitar led tracks has been maintained, one underpinning the other, coexisting in a state of unification. On the whole, the experience of hearing the instrumentation coalescing perfectly is an aural pleasure to behold. Van de Kree immense guitar work is stunning, perfectly matching Coral’s musical prowess. An easy path hasn’t been chosen here, which makes this an even more exciting prospect for the listener, the soundscapes shifting, sounding as if they are altering reality, choosing which elements to keep, and which to switch between, powerful indeed." – by John O'Boyle at "DPRP" (UK)

"Being more or less an concept album, the recording flows like its one long piece lasting more than a hour but don't be put off by the concept tag. Its not a self-indulgent type of album but rather a collection of great songs that blend and flow together into a flawless soundtrack that matches the visions of writer Roger Zelazny. The medi-evil fantasy themes are recreated here musically with dark, brooding themes mixed with psychedelic hypnotic sections. The music is very cinematic with sounds resembling what you would read in the fantasy inspired writings. What is also very effective is the mixture of loud and quiet parts which is perfect for both headphones or a surround-sound system, quiet parts that are both strange and unique blend well with loud sections that are dark and menacing. The use of guitar effects and spacey sounds gives everything a very spacious atmosphere and you even get the use of the theremin! The album is not too complex but its no easy-listening experience either, the constantly shifting sound-scapes and mood changes make this an challenging album to listen to but along the way there is also some powerful emotional moments that keep your attention level up to a premium." – by Ed Barnard at "Doommantia" (USA)

"All Roads Lead To Amber should be considered as nothing less than essential nourishment for the soul and pure cinematic bliss for the brain." – by Ryan Sparks at "Sea Of Tranquility" (USA)